Chico António is a versatile singer and musician who, during his 40 year career, has become one of the leading icons of contemporary Mozambican music. From a difficult childhood as a goat herder in the provinces and then street kid in Maputo, he started singing in choirs and took up the trumpet and flute, which led to him joining some of the most prominent groups in the country such as Instrumental Group No.1, RM (Radio Mozambique Group) and Orquestra Marrabenta Star de Moçambique, with whom he toured the world. In 1990, he won the Radio France Internationale Prix Découvertes for new talents with the song “Baila Maria”, resulting in a grant to study composition and arrangement in Paris under the mentorship of Manu Dibango. He released his first album in 1991, and on Dibango’s advice, he finished his studies and returned to Mozambique, where he immersed himself in the traditional musical cultures of his country, and through various collaborations explored the possibilities of fusing them with international influences, as well as composing for cinema and theatre. He has released 2 more albums under his own name, “Carretilha de Cocos” (2001) and “Memorias” (2015), as well as many joint projects with, among others with South Africa’s Madala Kunene, Reunion’s Grèn Sémé or the French-Tunisian Smadj.

Mark Mulholland is a guitarist, singer, songwriter and producer from Scotland, based in France, having also lived in Ireland, Germany, Czech Republic, Haiti and Mali. His influences include Celtic folk, country, reggae, blues, jazz, rock and punk, and his songs have been covered by many artists worldwide. He has released more than 20 albums as a musician, both solo and in bands, plus several others as producer, and many contributions as a session or guest musician. His 3rd solo album, “Revolutions go in Circles”, was released in May 2022 on the French label Ports of Call Music. He has toured extensively around the world, and his numerous projects include collaborations with artists from Europe, North America, Africa and the Caribbean, including the late Tony Allen, master drummer of afro-beat, kora maestro Toumani Diabate, Haitian poet Frankétienne, English post-punk troubadour Nikki Sudden and many others.

A meeting of two restless musical souls, one from Maputo, and one from Glasgow

It was perhaps inevitable that when Mark came to visit Mozambique in December 2021, his path would cross Chico’s, and a warm bond between them sprung up immediately when they met. After an hour or two of exchanging musical stories, the urge to play together became overwhelming, and they borrowed an extra guitar and started jamming and swapping songs, backing up each other’s compositions with an uncanny intuition despite the diversity of styles. An impromptu gig was arranged for the new duo in a Maputo bar for a few days later, and before Mark returned to Europe shortly thereafter, they vowed to build on this promising debut. Mark came back to Mozambique in March 2022, and they played live shows at the Mozambico-German Cultural Centre, and, with percussionist Julio Mariquel, at the legendary Maputo music venue Gil Vicente. In May Chico invited Mark to come back and join him and an all-star lineup for a concert at the Franco-Mozambican Cultural Centre in Maputo, which was filmed for national television. Mark has started contributing to the new album which Chico is recording with the Austrian producer and musician Roland Pickl and his band The Next, who have been based in Mozambique for some years, and Mark and Chico plan to work together on further concerts and recording projects. 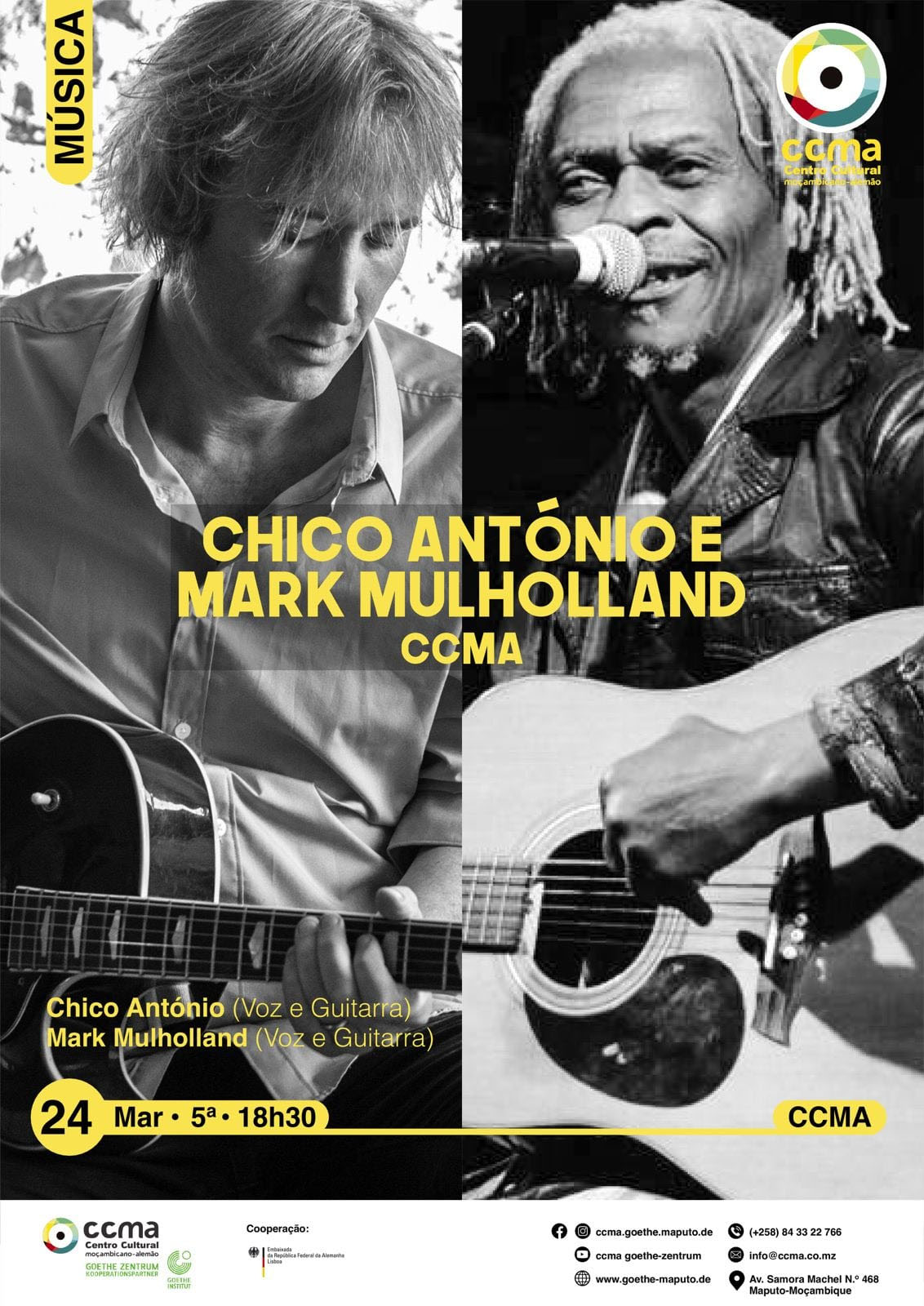